In this article we will study Theory of Demand and Law of Demand. we will discuss about Market Demand, meaning of demand, relation of demand  and price and also discuss about factors which affect market demand.

In economics,Demand refers to  the desire of the people to buy a commodity backed by willingness and ability to purchase  at certain price. The relationship of price and demand is inverse, it means if price of the commodity increases demand will decrease and vice-versa.

Theory of Demand and Law of Demand

According to the market demand, this law state that other things remains same or constant, if the price of goods and services increases the demand of a commodity started decline or vice-versa.

Assumptions of Law of Demand :

Law of demand shows , there is a inverse relationship between price and quantity demanded of a commodity. It means if price of commodity increases its demand will falls and vice-versa.This can be explained with the help of following schedule :

This schedule shows , when price of the commodity falls its quantity demanded increases and vice-versa.

Diagram of Law of demand according to schedule : 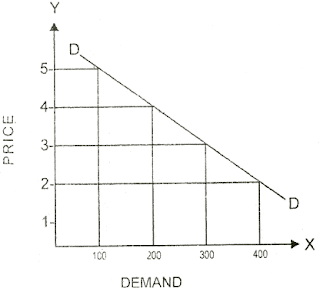 The Demand curve slopes downward from left to right, it means when price is 5 demand is 100, then price falls down to 4 and its quantity demanded increases from 100 to 200, so demand curve shows inverse relationship between price and demand of a commodity.

So we have studied Theory of Demand and Law of Demand. we discussed about Market Demand, meaning of demand, relation of demand  and price and also discuss about factors which affect market demand.

If you have any query Please let us know in the comments section .